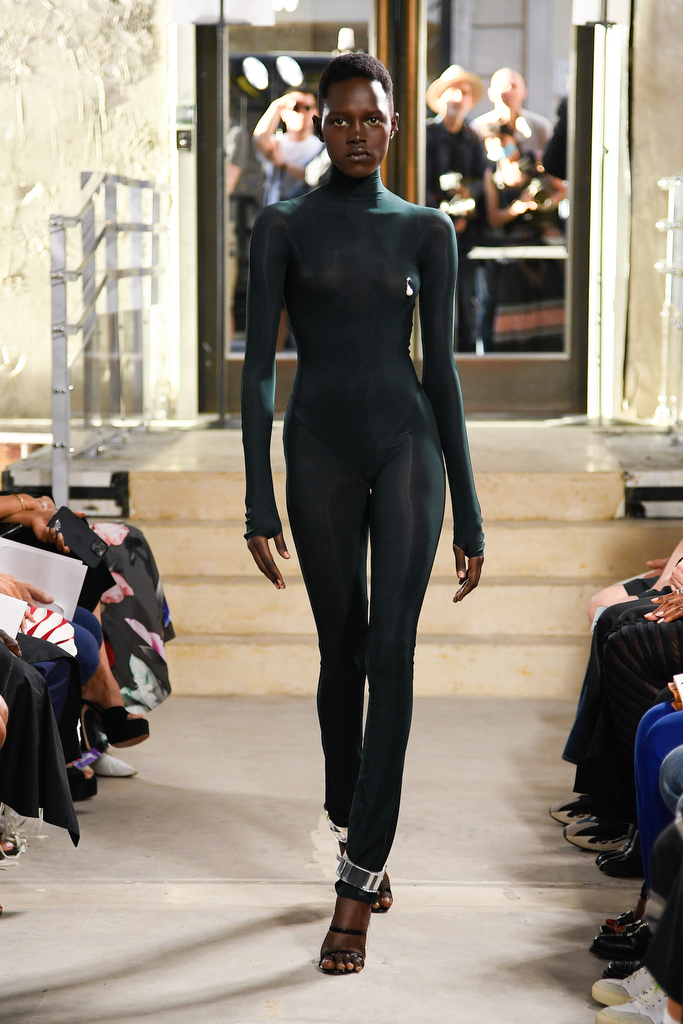 Should a filmmaker ever consider another live-action remake of “The Flintstones” — and make it fashion this time — Wilma Flintstone and Betty Rubble should definitely wear Alaïa.

It all looked sensational. Mulier’s third collection for the house that Azzedine built was a winner: alternatively raw and refined, and a convincing update on the late Tunisian couturier’s flair for a clinging, curve-enhancing and exotic brand of sexy.

The show had the electricity of a debut, with the designers Raf Simons, Pierpaolo Piccioli, Kim Jones and Martine Sitbon filing into what was formerly the Lanvin men’s store, and which will be a future Alaïa flagship and offices. (Alaïa parent Compagnie Financière Richemont bought the multistory building in 2017.)

The preshow conversation reached a deafening level in the gutted-out space as Naomi Campbell, Elle Macpherson, Karlie Kloss, Laura Harrier, Vincent Cassel and Rossy de Palma added a frisson of glamour on the eve of couture week in Paris.

Mulier opened his display with models encased and wrapped in multiple layers of sheer silk knit — first a dark green bodysuit with a pearl earring on one breast, then a red turtleneck dress over leggings. White cotton ruffles erupted over the hips and formed lopsided skirts, like whipped cream out of the can.

For a designer unfamiliar with draping, Mulier showed great flair, backed up by a formidable atelier. Fabrics swooped around female curves like the roller coasters at Six Flags, often knotted around the hips and dangling. Scarf-point and asymmetric hemlines also heightened the feeling of Stone-Age style.

Mulier said the latter was based on a 1992 design by the founder that was road-tested by Stephanie Seymour, but never made it onto the runway. The Belgian designer also took many cues from a 1984 collection.

“It’s about taking all the codes of Azzedine and explaining them to the young generation that don’t really know it,” he said backstage, describing a “new femininity” based on a “sexuality” unique to the house. “It’s basically empowering women in a different way than other brands can do.”