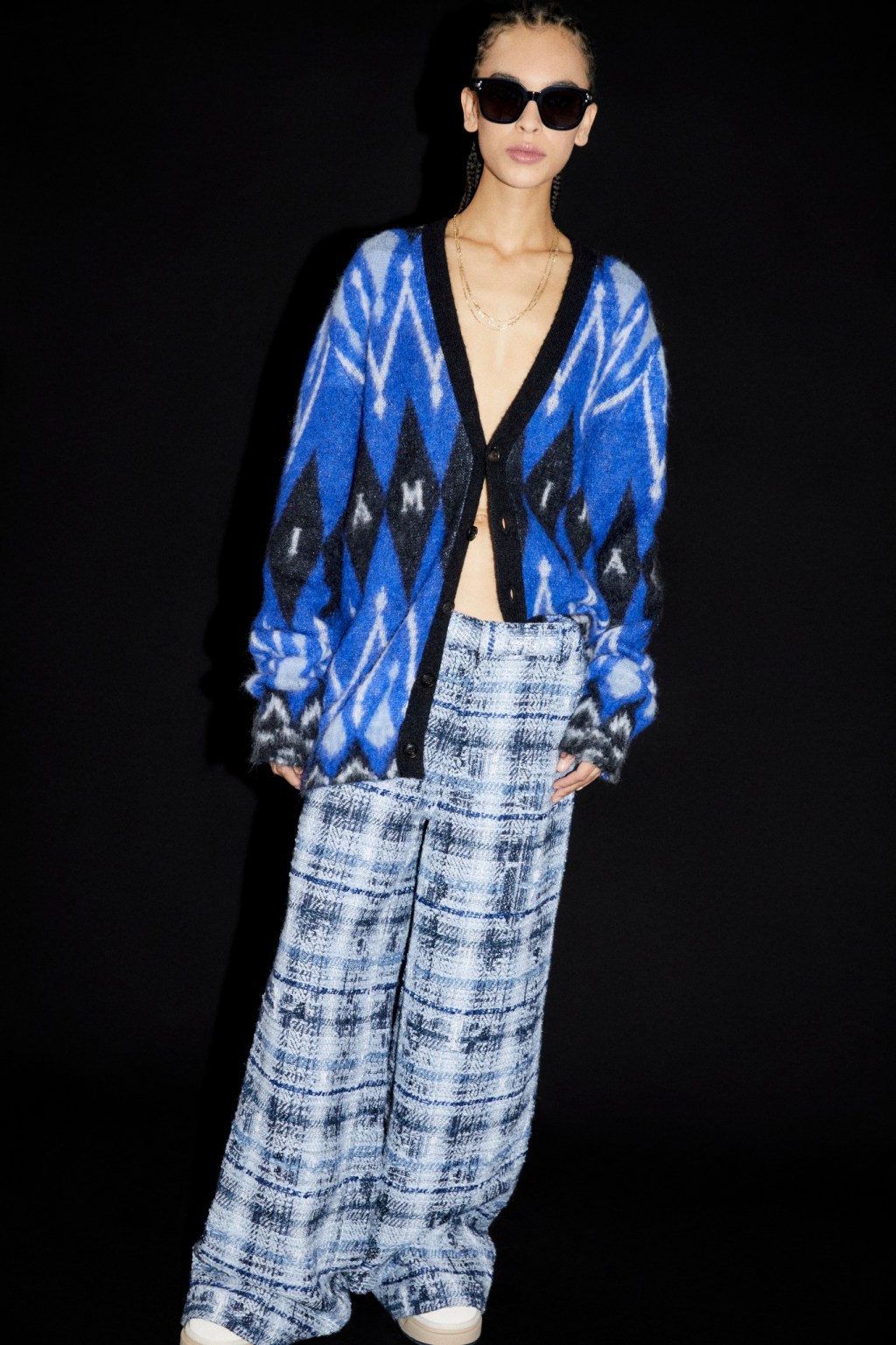 Mike Amiri found the fun in his third women’s collection, with logos, bubble shapes and bubble gum colors rocking him out of his neutral-hued, tailored sensibility just enough and pushing him more toward California street casual.

“The first couple of collections were the groundwork, and this collection was the bridge not only to the menswear, but to the synergy we want to have with the two as a lifestyle and a vibe that’s really chill,” he said of the loosened-up resort lineup, which picked up from his men’s collection shown in Los Angeles in February a bit of grunge (check the grandpa cardigan with “Amiri” spelled out across the diamond pattern) and skater (see the low-slung baggy trousers).

With minority investment from Renzo Russo’s OTB, the L.A. designer is in building mode with his first international store opening in Tokyo on July 15.

And with this women’s collection, it’s evident he’s getting more comfortable experimenting — maybe not yet with the star and bandana motifs, or the crystal embellished jeans that are hallmarks of his menswear, but with the way ’90s nostalgia has been trending, that might not be a bad idea.

“This collection was one of the most consistent with men’s as far as design, but what’s fun is taking those proportions and adapting them into womenswear with little adjustments in length and the waist,” he said.

He lasered denim into a plaid pattern, with “Amiri” spelled out in the checks, cut it into a cropped cocoon jacket, and layered an even teenier cropped jacket underneath. There was lots of layered proportion play, with baby blazers under oversize ones, big sweaters over shrunken ones and so on, while Amiri’s love of hybrids appeared in the French terry hoods on wool jackets, and drop terry waists on pants.

The designer put a big focus on outerwear, riffing on the ubiquitous puffer jacket with a whimsical grape-colored cropped bubble parka that was like baby Gap Yeezy, and a long, black modular parka with buttoned panels that can be released to create movement. “So you’re not fully covered…” he explained of the shape, also done in black leather with biker jacket details, which made for a fabulous coat. The staple Amiri men’s varsity jacket was also given a baby pink makeover.

“I don’t want anything too difficult,” he said, “I want everything to feel relaxed and easy.”

As to whether he will be bringing women’s to the runway anytime soon, he said, “It’s gaining momentum, the collection is growing, our partners are really happy. If I want to add that story, I definitely could, so let’s see.”