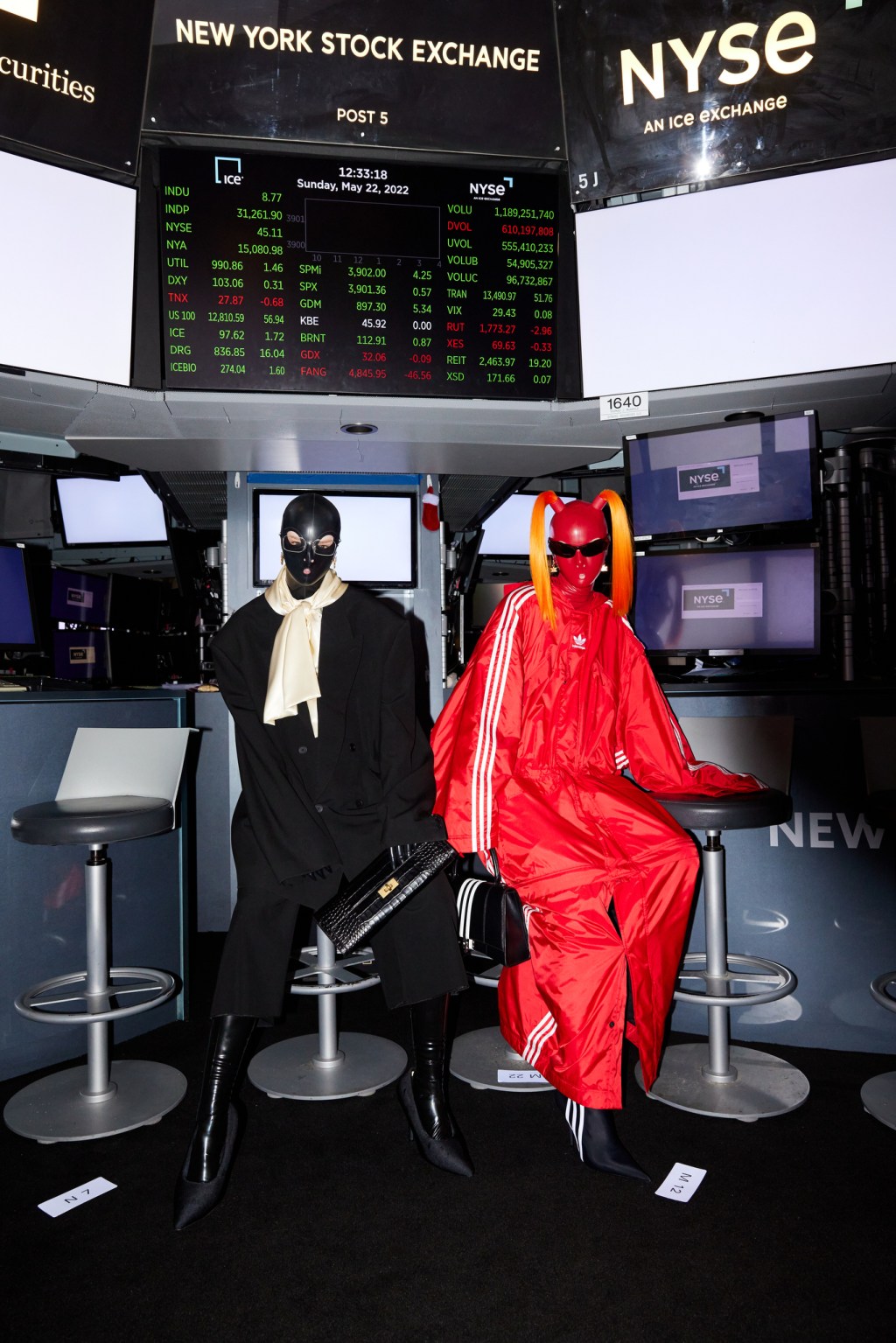 It was the ultimate vote of confidence in the U.S. market for Balenciaga to have a runway show on the floor of the New York Stock Exchange after the turbulent trading week that ended Friday.

Demna wanted to give back to the place that has been so instrumental to his success at the brand, he said backstage after the show, where Kanye West and Demna’s brother Guram Gvasalia waited patiently as a clutch of journos gathered around the masked designer.

During his tenure at the French house, Demna has relished in playing with American tropes, from Bernie Sanders to “The Simpsons,” the Kardashians to capitalism. Even Sunday’s show invitation was a thick wad of $100 bills (sadly fake, but amazingly realistic).

“This is New York,” he said of the Wall Street landmark.

It’s true, for better or worse, that America is money obsessed. And fetishism was at the heart of this vision of perverted power dressing, which had models in full latex suits with only their ponytails, braids and thick fake eyelashes poking through slits, stalking around Wall Street’s money pit lit up with stock symbols and news crawls like some kind of dystopian video game.

Last season, Demna was one of the few designers to use the runway to comment on the Russian invasion of Ukraine. This show had plenty of drama, too, starting with the ringing of the stock exchange bell and music so ominous, John Williams couldn’t have done it better.

“We have to trigger emotion with these shows. For two years, we’ve been sitting at home trying to come up with digital things and video games and films. I miss that moment of yea, it’s terrifying. We live in a terrifying world and fashion is a reflection of that and if it triggers that fear or terror, I’ve succeeded.”

He channeled “Wall Street,” “Working Girl” and “Alien” all at the same time, showing off the brand’s expanding commercial prowess with lots of luxe wardrobing options, in addition to playing to its streetwear base with a new Adidas collaboration.

A baggy black suit of the sort that blew up the internet when Justin Bieber wore it to the Grammys was imposing but with a wink, worn with black bulbous rubber boots that conjured clown shoes and wire rimmed glasses perched just so on a latex covered face.

A black silk pussy bow blouse in Demna’s signature linebacker silhouette topped a sleek glossy black croc skirt with body-con black legging pumps for a vision of feminine power. And a black sequin gown glittering from top of head to fingertips was glamorous and insect-like at the same time.

It was terrifying and riveting and then at last the music eased up into “New York, New York.”

Strip away the theatrics and what was clear is that Balenciaga is becoming a real power player in tailoring. There was a lot here to buy, including a fabulous 1980s-nostalgic double-breasted black blazer in a triangle silhouette over a skirt; a black-and-white polka dot pleated silk plisse dress with padded shoulders and flared sleeves, or a long, lean camel coat. The outerwear was uniformly strong, from oversize, drape-y trenches to collarless robe coats and beautiful wrap coats, all of which would look great on the commuter (or private jet) class.

As if to hedge his bets on dressing up while the pandemic is still raging, Demna debuted track suits as business attire in a collaboration with Adidas that put Balenciaga trefoil logos and stripes on T-shirts, robe coats, destroyed denim, duffels and hourglass bags, available now. Following on the heels of the Adidas collaboration with Gucci, this hewed more toward Balenciaga’s baggy, oversize, workwear aesthetic, and may be more accessible for it. The house that Demna built has more of a knack for high-low.

There was a lot to think about in the show, which was fast-moving, urgent and social commentary, in all the ways the designer can be.

Undoubtedly one of America’s biggest commodities is celebrity and it’s been interesting to watch Demna and his muse, Kim Kardashian, use masks to play with the idea of fame and anonymity, as seen on the 2021 Met Gala red carpet. (None of the Kardashians were in attendance on Sunday because of Kourtney Kardashian’s and Travis Barker’s wedding in Italy.)

Continuing that theme on the runway in the context of the stock exchange, with masked models toting briefcases and coffee cups, sparked a different kind of image of the nameless, faceless commuters in Lower Manhattan and elsewhere who are slaves to the almighty dollar.

Even after swearing never again after the COVID-19 lockdown, we are right back there and it’s bittersweet. But that’s business.

Speaking of, the show coincided with an announcement that Balenciaga will now be accepting cryptocurrency, which is experiencing its own volatility.

“If we watch news, we don’t have confidence in anything anymore,” Demna said, as headlines about inflation and weakening consumer confidence rolled by on the news tickers on the floor. “I’m an optimist. The American market supported my vision at Balencaiga from Day One, which is one of reasons [that] for our first show outside of Paris, we wanted to do it here. There are ups and downs and we’re at the epicenter of that at the moment, but we’ll get over that.”

But does he own any cryptocurrency?

“No,” he laughed. “I don’t understand anything about it.”