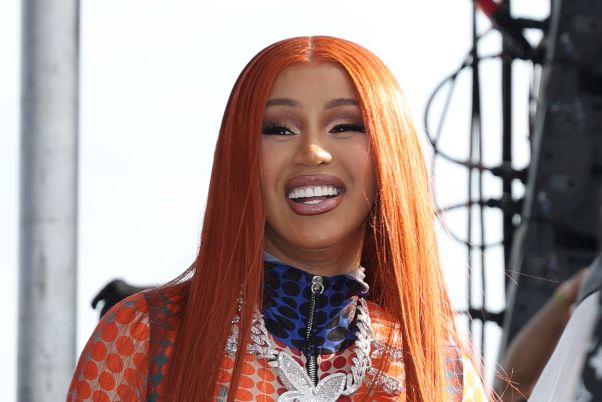 Cardi B is coming in hot with a brand new music video. The Grammy Award-winning rapper has finally released the visuals for her new song, “Hot Sh*t” featuring Lil Durk and Kanye West. The new track is from Cardi’s long-awaited follow-up to her debut album “Invasion of Privacy” and the first single since last year’s “Up,” which was followed by her chart-topping record and mega-hit “WAP” with Megan Thee Stallion.

Directed by award-winning filmmaker Lado Kvataniya, the music video kicks off with Cardi towering over her hometown of New York City before strutting down the communications tower of a skyscraper. Cardi stayed true to her edgy and daring aesthetic making bold style statements throughout the video. In the beginning, she wears a risky black PVC bodysuit that was outlined with metal and featured a plunging cutout and gloves. She complemented the look with sheer tights and matching thigh-high boots. The eye-catching footwear had a thick chunky outsole and were set on a minuscule stiletto heel.

Another clip shows the Reebok collaborator in a plunging white gown. She later appears alongside Durk in a floor-length leather coat and black and gold bodysuit.

Later in the visual, collaborators Lil Durk and Ye each take their turn at the mic for their respective guest verses on the bass-thumping track. Durk raps atop a water-logged car in a post-disaster city flood zone, while a masked Ye spits alongside a sleek, futuristic motorcycle as the landscape around him vibrates to the beat.