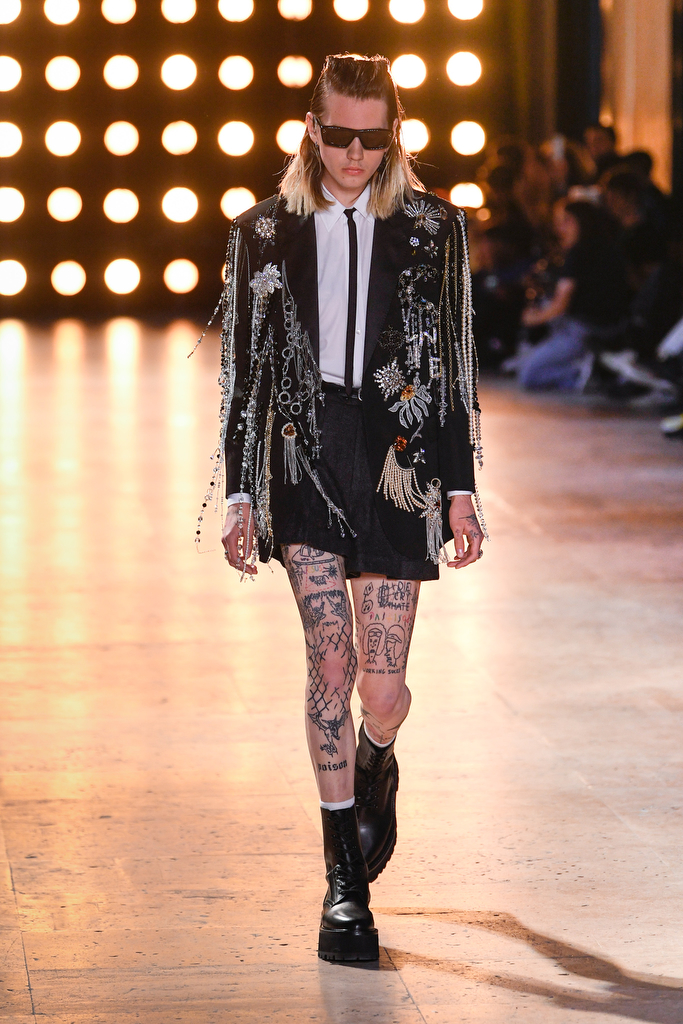 Not even Hedi Slimane’s, even though he is on a major roll at Celine, and even though he applied wheelbarrows of crystals to his spring collection of rock-star fashions.

There was an electric atmosphere before the Sunday night show, which wrapped a jam-packed IRL Paris Fashion Week and a strong men’s season, as Eddie Redmayne, “Emily in Paris” star Camille Razat and designer Jeremy Scott milled around sipping small bottles of Champagne, and luxury titan Bernard Arnault chatted up a storm with American artist Alex Israel.

After a couple of announcements that the show was about to start, everyone dutifully took their seats and a hush eventually settled on the crowd. But then the thousands of tweens and teens swarming the venue let out a scream – the South Korean stars had arrived – and dozens of guests dashed for the doors and windows, including Arnault, to get a peek at the pandemonium, and grab content for their social feeds.

The trio waved to the crowd like royals on a jubilee balcony, prompting waves of adulation, and entered the building one floor above the runway theater. Inside, guests lowered their cell phones and returned to the benches – until the stars entered the room, and it started all over again, and then repeated a third time when the trio finally sat for the show.

Eventually, hundreds of car headlights lit up the space as giant Calder-esque mobiles strung above the runway were lowered and spun into action, the golden plates casting eerie reflections.

Then, finally, out came the clothes: artfully faded jeans with the hems let down; stovepipe leather pants; pointy boots with cone-shaped heels; fancy blousons decorated with studs, fringe or all-over sequins; Elvis-worthy retro tuxedoes, and black suits with neckties as skinny as shoelaces. They were magnificently realized and suited to each achingly thin model, variously emitting punk, rockabilly, grunge or emo vibes.

After the show, Celine dispatched press notes: a page dedicated to Gustaf, the band Slimane commissioned for the soundtrack; a page to David Weiss, whose artworks appeared as prints and embroideries, and then another page to the venue, since the Palais de Tokyo is marking its 20th anniversary this year.

So is Hedi Slimane, who staged his sophomore show for Dior Homme two decades ago at the mammoth Paris museum, which was conceived as a showcase for contemporary art.

There wasn’t even one line about the clothes, as if they were self-explanatory. They were certainly familiar enough, harking back to earlier Slimane collections during his Dior and Saint Laurent days.

Perhaps what gives Slimane such longevity, and his current momentum, is that he doesn’t get bogged down in the foibles of fashion, preferring to embed his designs in a broader cultural context spanning music, architecture, artistic movements, pop culture and youths, from the ones who sat cross-legged to watch the show to the thousands of howling groupies outside.

Guess what? The stand up-sit down follies repeated anew after the runway display ended. Guests rushed for the doors twice before being urged – inexplicably – to once again take their seats.

Ultimately, people could leave via the backstage, exiting on the opposite side of the building through fans as far as the eye could see. What will they remember about this night?