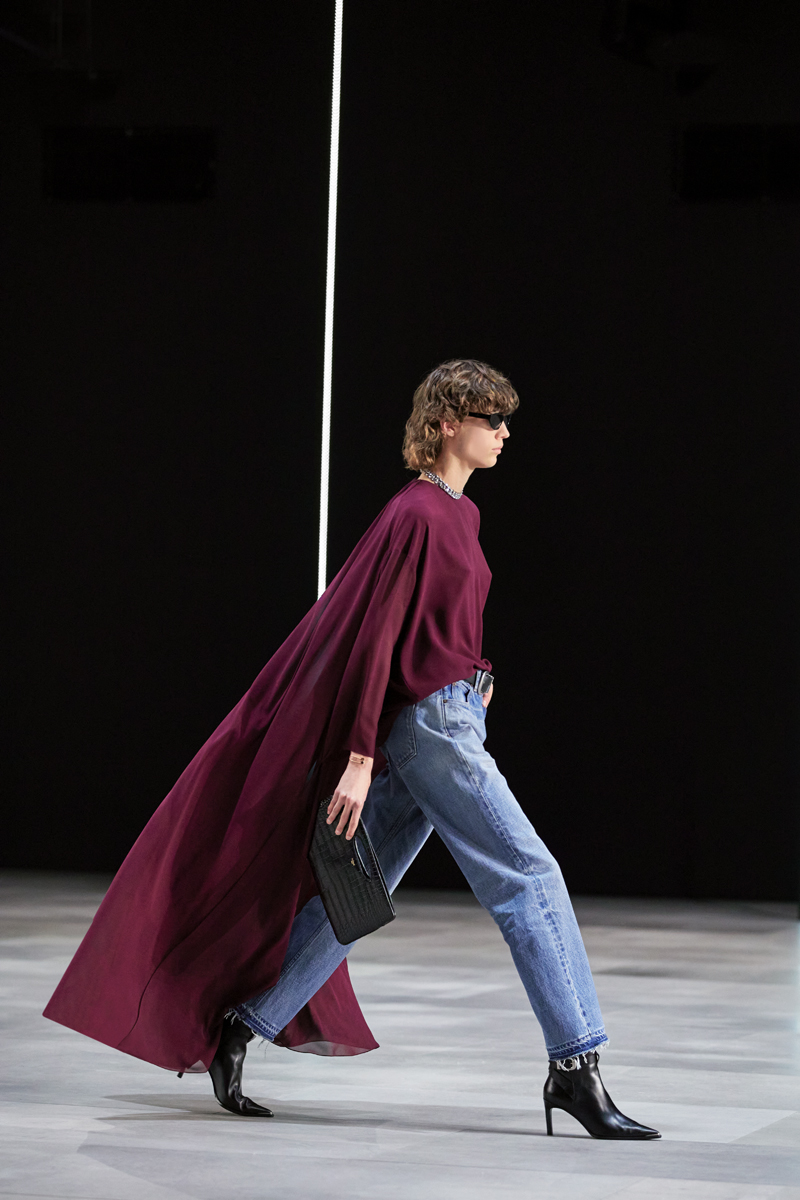 Squeaking in with his fall 2022 collection film for Celine two months after Paris Fashion Week and just before the destination cruise shows kick off in earnest, Hedi Slimane was in fine form.

By now his formula is familiar — spectacular settings in France, a hypnotic-bordering-on-annoying soundtrack, a few exits worn by house ambassador Lalisa Manobal, all slickly produced — but it suits his to-the-point fashions, eminently wearable and nonchalant yet elegant.

Almost every model sported black sunglasses, wash-and-go hair and a chain-handled handbag, the most striking in octagonal shapes. Handsomely tailored coats and blazers were underpinned by black turtlenecks accented with a short gold chain, while sharp-heeled boots finished off boyish jeans.

Slimane is steadily making Celine a go-to house for terrific jeans and now cool leather pants, too, all finished off with sharp-heeled boots. The designer mashed up countrified checks and tweeds with shimmering dresses, urban leathers and skirts in a way that seems completely plausible.

His leather blousons, snap-front shirt jackets, peacoats, cardigan-like shearlings and strapless minidresses are hardly revolutionary, but they are also appealing, luxuriously realized and slyly cool. Apart from a logo windbreaker and a cocoon-shaped gray hoodie-cum-cape, Slimane eased up on logos and streetwear shapes in favor of crystal-pavéd evening dresses, sparkly cardigans and draped, scarf-like tops.

The clean lines of the clothes were a foil to the lavish settings: the gilded 18th-century “Salons d’Apparat” at the Hôtel de la Marine on the Place de la Concorde, which reopened last year after a long renovation. Slimane’s press notes, which make no mention of the clothes, detailed the architectural features of this historic building, those salons “originally used to present the royal collections to French and foreign visitors.”

Interspersed were scenes captured at the Hôtel National des Invalides, and a minimalist black pavilion plunked at the foot of its gilded Dome where Napoleon is entombed. Slimane has staged physical shows there in a similar black tent, so let’s hope it’s a teaser that Celine will be back on the official calendar soon.