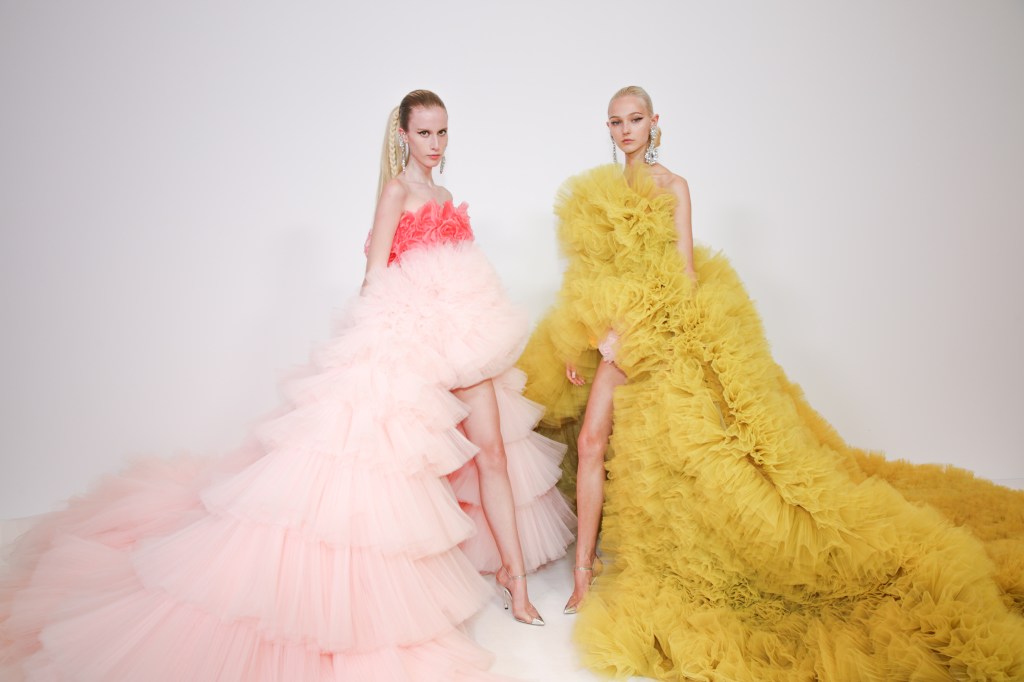 Backstage before any Giambattista Valli show, the designer sets up a room to meet journalists in a calm atmosphere, and with the bare minimum tools: A few visuals and words pinned to a mood board, and the run-of-show pictures lined up in a single row.

Also, there is always a spectacular bouquet of flowers: not the tight clump of cloned roses many brands dispatch by rote, but something romantic, frothy and arresting. You could almost draw a direct line from these blooms to some of the extravagant tulle gowns that closed his treat of a fall show, marking a decade in haute couture.

Valli said he didn’t wish to celebrate the milestone, though he did reflect on his 20-odd couture shows and identified two sides to his design coin: one based on more austere shapes, and restrained volumes. “Like a Fontana cut on the canvas,” he said. “What’s important is the line of the silhouette.”

The designer opened his show with a series of sleek white evening columns, the slits or hem trimmed in lavish sprays of ostrich feathers. These cast a spell with their pristine shapes and frothy or sparkly embellishments. The latter reached a zenith with a jumpsuit alternating panels of silver sequins and fluffy feathers, honoring the black-and-white photo of Studio 54 pinned backstage.

The foil to his relatively restrained and “slick” Italian side was expressed with miles and miles of tulle, acres of silk faille and vast, ruffled expanses of silk duchesse. Here, Valli didn’t hold back, coloring his fishtail columns in the same bright, toy-like shades of the Mylar balloons he use for his backdrop. In fact, he piled up so much fabric in his tufted trains that you could see the strain in the models’ faces, including his longtime muse Bianca Brandolini, who closed the display in an apricot-colored confection.

In a nice wink to his first haute couture show that opened with a white couture smock, Valli sent out six, each finished off with a grand white skirt. Each had a unique shape and were distinctly Valli, a testament to the designer’s persistent, indelible vision.