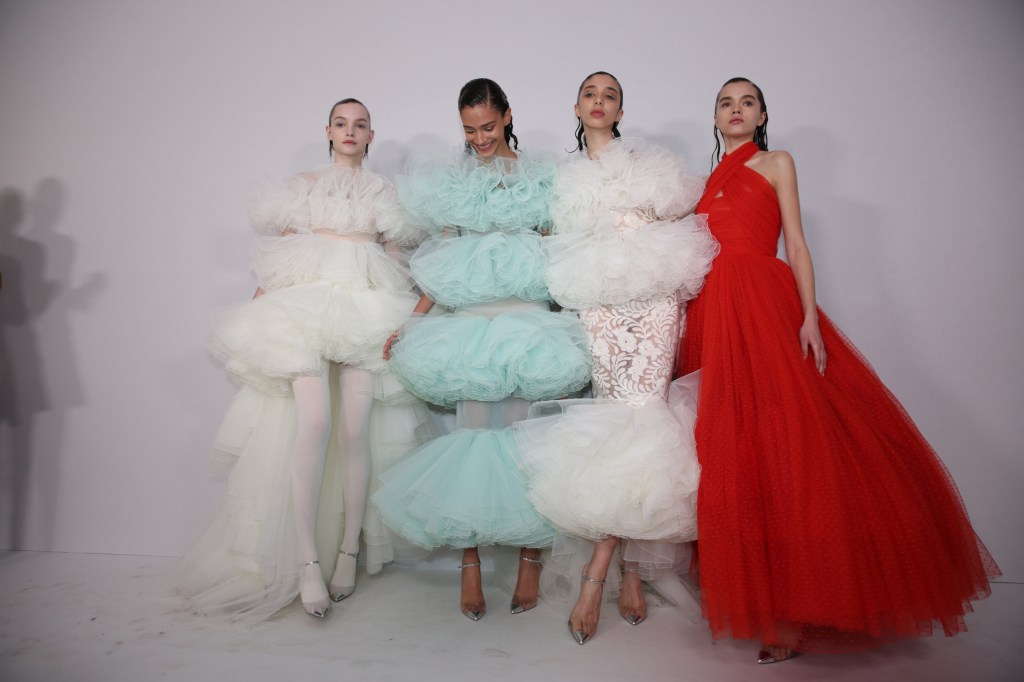 The scene captured at Brasserie Lipp in 1968 by Henri Cartier-Bresson says a lot about French women, according to Giambattista Valli, who had a copy of the photo pinned backstage.

It depicts a mature woman in a suit and hat reading Le Figaro and looking askance with visible disdain at the young woman seated not far away, her long hair hanging in her face and her newspaper barely shielding the bare legs poking out from under her short, white minidress.

“In France, women have a feminist attitude in a very modern way,” Valli explained. “They are very complex, they assert themselves, and they don’t care about any critique. They just want to be themselves. I really love that about French women, because I learn from them.”

Valli opened his fall show with a ringer for that white minidress, cuing a smooth and confident collection that frequently nodded to the late 1960s, from the sleek, princess-line coats in a rich shade of red to more Space Age minidresses with mirrored surfaces. Nicolas di Felice, creative director of Courrèges, which like Giambattista Valli has Artémis as a shareholder, was in the front row and looked on approvingly.

Valli also dipped into the early 1970s, parading bell-bottom pants under a flaring, ocelot-print trench, and long, sparkly afghan coats with a thick yarn fringe that you could imagine on Marisa Berenson back in those groovy times.

Valli excels at polished daywear, and he even ventured into something close to a biker jacket, though he added plush alpaca and patches of animal-print brocade. For the finale, he let loose with a few of his famous tulle confections, one resembling a topiary from the gardens of Versailles, but in the most beautiful way imaginable.