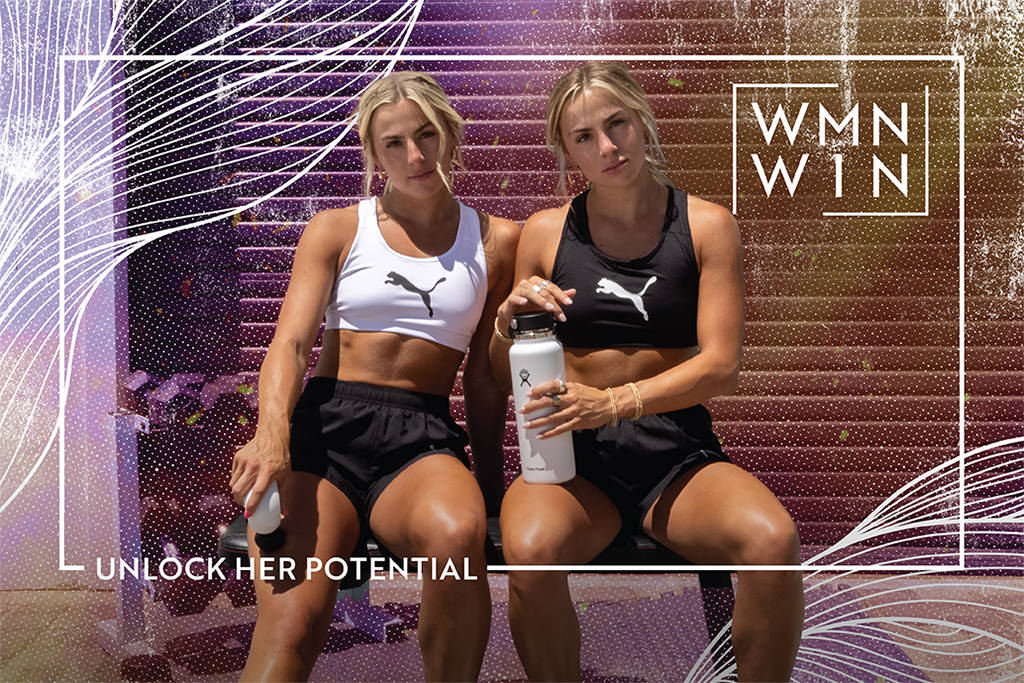 With Title IX turning 50, the spotlight on the fight for women’s equity in sport is brighter than ever. To further the fight, Champs Sports has teamed up with female athlete advocacy platform Voiceinsport for its latest “Women Win” campaign.

The latest iteration of “Women Win” — which is launching today — is part of the Foot Locker Inc.-owned retailer’s ongoing effort to promote gender equity within sports. In addition to the campaign itself, Champs Sports will engage in programming in key cities throughout July across the country.

Champs Sports kicked off the effort on July 17 with an event at its Homefield in Pembroke Pines store in Florida. The event featured college basketball standouts Haley and Hanna Cavinder — who signed an NIL deal with the retailer in 2021 — as well as Everglades High School athletes. The remaining events will include a Reebok workout class with former WNBA player Ty Young in Dallas, an Under Armour event with D1 Volleyball player Sydney Moore in Atlanta and a panel discussion in Los Angeles for the Voiceinsport Foundation’s Title IX Micro Grant Program led by Champs Sports and Puma.

Additionally, a collaborative product range — dubbed moreVIS — will release via the Homefield in Pembroke Pines store and Champssports.com, with all proceeds from sales going toward the funding of memberships for women athletes “to unlock access to Voiceinsport mental health and nutrition services.”

What makes this year’s iteration of the “Women Win” campaign particularly impactful?

“It’s a campaign that we’ve been running now for quite some time, this is the sixth year that we’ve run ‘Women Win.’ We, as a retailer, do the best we can to make sure that we’re establishing collaboration and sparking conversations that are really important. This year, I think we found a really great partner with the Voiceinsport team. [Voiceinsport founder and CEO] Stef Strack is extremely strong in what she does, and she’s been able to establish something for the female athlete that really hasn’t existed before and is using it as a as an opportunity to build conversation around matters that are that are important — and there’s an accelerating number of those sorts of things. Advocacy with 50 years of Title IX this year was a pretty big deal with some of the things that they did up on Capitol Hill. We think now’s a really good moment for us to use our platform as a business and help spark conversation among our consumers as they look for a good place to build community.”

How will the effort play out for the rest of the year?

“We’re working across our business to bring in a number of our vendor partners, we’ve had a successful run with working across the board with the series — Puma, Adidas, Reebok, Under Armour, Converse New Balance, Ugg and our Cozi brand, which is a Foot Locker Inc. property from a private label standpoint. We brought them all together and have a series of programming. Essentially it started last weekend with some things that we did down in Pembroke Pines at our Homefield store. We brought in one of our initial NIL partners, the Cavinder twins, who we partnered up with several months ago and signed them to a two-year deal. We have a series of key markets and we’re linking in with all those key markets with activations that will run through the month of July. A ton of things are coming down the pike as we start to move forward into the next couple of months. We’ve been working on this now for quite a number of months, and our teams are doing a really good job with the programming and bringing it down to a community level where we can actually physically engage and have conversations and collaborate with consumers at the ground level in some of our key markets.”

Why was Voiceinsport an ideal partner for Champs Sports for this effort?

“Stef Strack who started that organization really has done something that’s really unique. One of the things that we’re doing from a Champs perspective is that we rounded out our consumers to what we call the modern athlete. It is a way for us to link in to all the things that are needs of an athlete. It’s not just performance on the field of play, it’s all the things that are about an athlete that they do around advocating for change and social justice and equity matters. It’s thinking through all the things that are important to sport. They say that 90% of sport performance is mental, so we want to link in to what it means to perform and think about what is helpful from a mental aspect. The sports psychologists that are part of our overall campaign that we’re doing, that’s also a large part of what Voiceinsport does. They bring in the psychology that’s part of sport, too, which is really important, and they’ve developed a platform that is all around mentorship and advocacy and all the things that you’d want to see. I don’t think there’s really any other platform that’s out there doing it in the same way, so we found that they were really the right partner.”

How would you best describe the impact Title IX has had on the world of sports? And why is it more relevant now than ever?

“Leveling the playing field has been something that has been part and parcel of what Title IX has been a part of, and as you continue to think through where we are today, women’s empowerment has been something that’s super important and making sure that the female athlete has an ability to use that platform and establish a connectivity on the things that really matter. The athletes themselves, whether it’s been social change through African American athletes over the years, whether it’s the female athlete now establishing a platform and giving a ton of exposure to equity issues, we want to make sure that we keep a voice out there. It’s really important now, given all the things that are going on across the globe, that we do lean in here. You’ve got athletes like Megan Rapinoe, who is the women’s soccer player who has been very much at the forefront of change, and you’ve got a number of other athletes that have been a part of it. We partnered up with a group called Uninterrupted last year that’s gone into this year, and we’ve connected with Sedona Prince who has been a very outspoken athlete, plays for the University of Oregon, and and has been very much at the forefront of leaning into some of these issues with regards to Title IX and equity. Title IX was very good 50 years ago in terms of establishing legislation that the NCAA was going to live by and march toward, and now we need to continue to make sure that as we go through the next 50 years that there’s some things that have been gone well, but there’s certainly a lot more that we need to do to spark further change.”

“It’s another really important piece of legislation that we can codify as we move forward. As Stef and others come along to help support some of the efforts that are happening up on Capitol Hill, we know that things sometimes take a long time to actually be built into law, so it’s important to get in front of it now as the team continues to work on making sure that there’s a willingness to be successful at implementing change as we move over the next 50 years. Stitching into the fabric of our society the things that are really important around equity — and its equity at all levels — but certainly the equity around what’s happening from a female perspective is super important. Some of the things we’re doing from a Foot [Locker] Inc. perspective is we’re making sure that we do things around more empowerment for female voices across the business from a leadership perspective. This is another thing we would say is super important, using sport as an advocacy for change as we move into the next 50 years.”

As the spotlight increases and the fight for equality continues, what does the future of women in sports look like?

“There will be no barriers to women in sports. We need to make sure that pay equity is there. We do it as a corporation, but it should be there or in the sports platform too. Female athletes have been successful not only in the field of play, but also in business, so we need to make sure that we find ways to build bridges across all aspects. One of the things that I think is important as a society is that we find individuals who have been very successful in making sure that they are not involved in just women’s sport, but involved in sport from a much more broad based perspective. You see it in programming. It used to be 20, 30 years ago that you could not find a female broadcaster in sports. Now, you find a lot of them speaking not only in female sports, but sports in general — men’s, women’s, etc. across the board. We want to see more of that change as we move through the next 50 years, and make sure that it’s an equal playing field and that we have the ability for females that want to exceed in the world of sport and beyond to not be hamstrung by gender and make sure that gender is no longer a factor.”