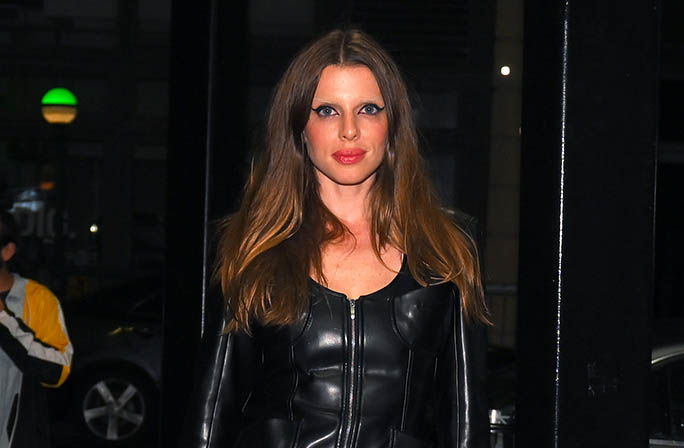 Julia Fox is remaining ready for the runway — both on and off the catwalk — while in Paris this week.

On Sunday, the “No Sudden Moves” star posed and flipped her hair on a bridge in a TikTok video reposted on Instagram, wearing a white Mowalola crop top with red and black lettering reading “Bad S.L.U.T.” Her outfit was finished with a black leather Diesel jacket, sunglasses and a white studded Abra pochette — plus a pair of futuristic black sunglasses. However, making the boldest statement was Fox’s bottom — a black asymmetric miniskirt that included an exposed thong strap. Finishing her outfit was a black leather pair of thigh-high boots with pointed toes and stiletto heels by Alexander Wang.

“@alexanderwangny These boots were made for f—ing hunny!!!! And don’t get me started on the skirt with a built in thong!!!!,” Fox captioned the clip, tagging all of the brands in her outfit.

Fox has worn a variety of sleek dresses and catsuits on past red carpets, hailing from Wang, Dior and Jean Paul Gaultier. The “PVT Chat” actress‘ formal footwear has also included pointed-toe pumps by Christian Louboutin, Giuseppe Zanotti and Manolo Blahnik. In recent weeks, Fox has become a rising star in the fashion world, attending Diesel and Versace shows during Fashion Month and making her runway debut in LaQuan Smith’s Fall 2022 fashion show.

Click through the gallery to see Fox’s best style moments.