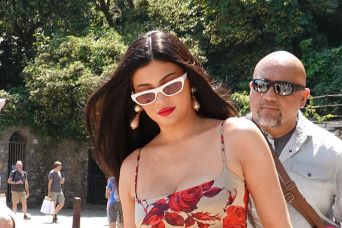 Kylie Jenner used a viral filter to show off her outfit of the day.

The mom and business mogul made a quick Tiktok, checking out her outfit in the camera’s lense. The star popped a filter onto the short video, making the screen sway and wave to the Latin sounding beat of “Cumbia Buena” by Grupo La Cumbia.

The “Kylie Cosmetics” owner is vastly popular on the app, amassing around 42.5 million followers. Jenner is quite active on the platform sharing sneak peeks of her daily life, from trying her hand at viral sounds to daily vlogs in three minute maximum videos.

Jenner filmed the video in a black jersey knit maxi dress. The style was fitted, following the natural progression of Jenner’s frame, with a scoop neckline and no sleeves. The “Keeping Up With The Kardashians” star twirled, showing off the back of the dress which was largely the same, except for a higher back piece that mimicked the front only slightly. The makeup mogul had lavender almond style nails and wore little to no jewelry.

Earlier in the week, Jenner went out in West Hollywood with her boyfriend Travis Scott for date night, styling a similar silhouette to this dress but in a skin-tight PVC black mini dress. Jenner continued with a monochromatic moment with a futuristic pair of mules.

The style featured a pointy open-toe and sat atop a pyramid heel. When it comes to her footwear style, Jenner tends to stick to trendy heels and cool sneakers. She’s been seen in styles ranging from square toe to PVC material to strappy stilettos from brands like Christian Louboutin, Dolce & Gabbana, and Valentino. Her kicks tend to be from Nike and Air Jordan.