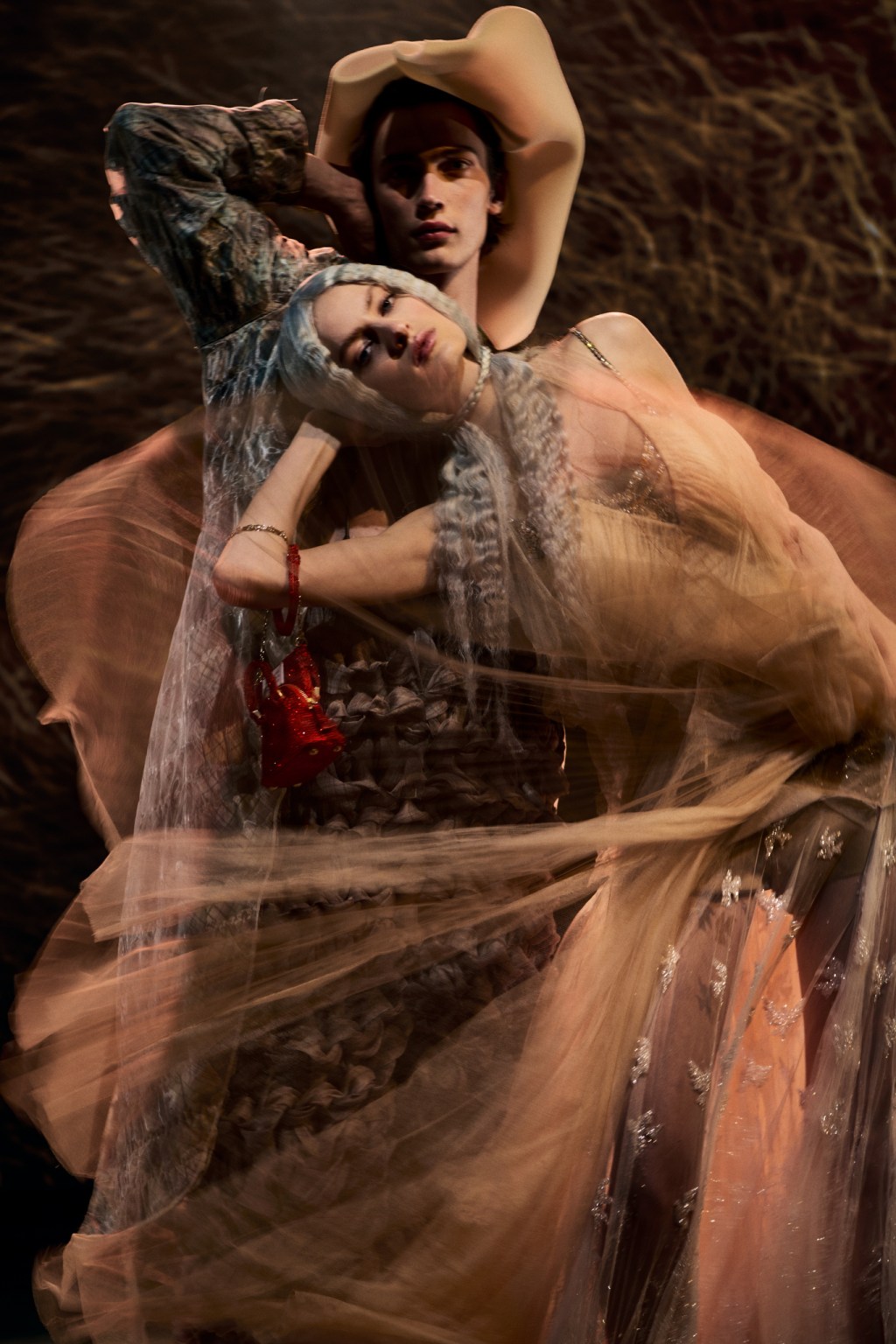 For its return to the runway, the house showed another film, except this one was performed and recorded in front of a live audience, including Kim Kardashian in a black hat and veil, at the Théâtre National de Chaillot in Paris. In an ambitious performance that mixed theater and rudimentary special effects, models lipsynched to a pre-recorded soundtrack as the livestreamed movie unfolded in real time.

The narrative, devised by creative director John Galliano, was elliptical at best. His road movie, titled “Cinema Inferno” and adapted by U.K. theater company Imitating the Dog, blended disparate elements that brought to mind film classics including “Badlands,” “Bonnie and Clyde,” “Kill Bill” and “The Wizard of Oz,” as well as a host of B-movies, ranging from Westerns to horror flicks.

It provided a somewhat chaotic showcase for the intricate designs, which mixed innovative textures, some created by blasting garments with sand, with diaphanous gowns and sculptural coats inspired by the golden age of Hollywood. Cowboy duster coats and sequined teddy boy jackets mingled with trapeze dresses spliced together from sorbet-colored tulle petticoats, and recycled pieces made from 19th-century bedlinen.

Once you surrendered to the absence of plot, it was easier to appreciate the quirky details: the ruby slippers paired with a crisp white swing coat and a cap with bunny ears; a riff on surgical scrubs, via voluminous coats made of materials including neoprene, nylon and bouclé wool; and latex caps that were a cross between an aviator hat and a Pierrot skullcap.

Periodically, guests were jarred out of their reverie by shootout scenes, several of which involved the actors pointing prop handguns and rifles directly at the audience. Given the recent string of mass shooting in the U.S., Denmark and elsewhere, these struck a sour note.

The live-action featurette has been done before. During their tenure at Kenzo, Humberto Leon and Carol Lim let their coed fall 2018 collection play out on a movie set, but their performance resulted in a six-minute film. Clocking in at more than half-an-hour, the Margiela version tested viewers’ attention span.

Galliano was a pioneer in the use of storytelling to elevate fashion shows from a commercial showcase to an artistic statement, most notably through his collaboration with the late set designer Michael Howells on his shows for Dior and his eponymous brand. This season proved his experimental streak is intact, even if the format left you wanting for more fashion, less entertainment.