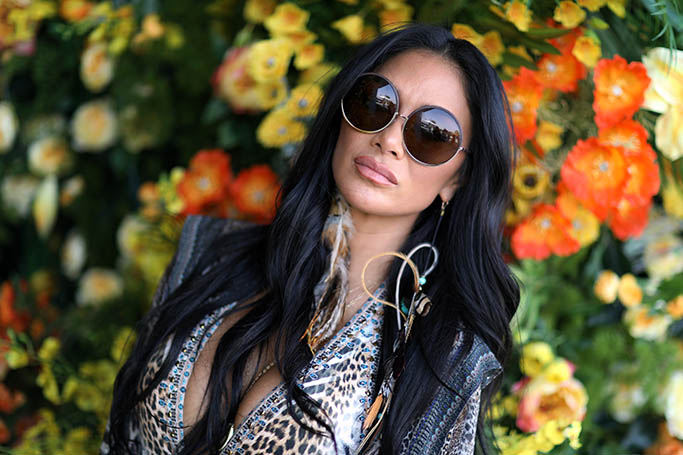 Nicole Scherzinger took to Instagram today to share a video where she demonstrated her dance moves while modeling a swimsuit.  The Pussycat Doll singer glowed under the summer sun, noting in the caption, “This sunshine makes me want to act up!☀️” — relaying her tranquility to her supporters.

Scherzinger was seen flipping her long black hair back and forth while posing in her two-piece blue bikini, which featured a cutout at the center of her bust and fabric wrapped around as a halter top. The strap came around to go over her shoulders, which added comfort and support to the bikini top; the design was especially effective as she plunged into the water after leaving the infinity pool’s edge. Halterneck tops feature an open back with straps that secure around the neck, exposing the shoulders.

The chic swimsuit’s design has interesting origins. Bikinis emerged in the 1940s, but the designs weren’t found on beaches until the 1960s due to the controversial nature of the two-piece suits. Bikinis finally gained mass acceptance in the ‘80s, becoming a swimwear staple. Today, the term “bikini” includes everything from high-waisted two-pieces to string bikinis that show ample skin.

Though she didn’t note her location, it would be no surprised if the video was filmed in Mykonos, Greece, as she recently celebrated her birthday in the picturesque holiday spot.