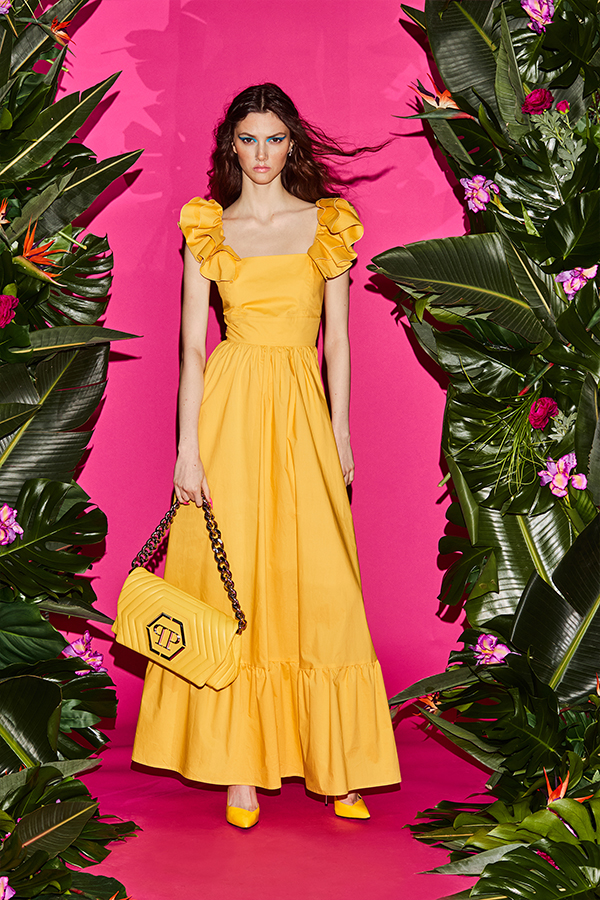 The laid-back and breezy atmosphere of Honolulu resonated particularly well in off-the-shoulder short frocks with ruffles, ruffled and handkerchief hem dresses, which if stripped of the heavy-handed accessories — vinyl pumps with crystal-covered skulls, towering plateaued sandals, cowboy boots covered in rhinestones and handbags featuring flashy logo plates — could easily be worn by an off-duty diva sipping Mai Tais on the beach.

Prints galore were out in force for sheer track pants and cropped tops or short body-con miniskirts and tops, as well as tuxedos with exaggerated lapels worn with matching bralettes.

One might argue that the entrepreneur/designer who recently became father of a boy is showing a less flashy edge, but there’s business reasoning behind it, too.

Zooming in from the South of France and occupied with dad duties, Plein said he’s making further pushes into the women’s category to rebalance its share of overall sales. Broader and more wearable pre-collections are part of the strategy.

Those gemstone yellow, pink and green numbers from resort will surely befit the flagships Plein is opening in Miami and Rio de Janeiro this summer.