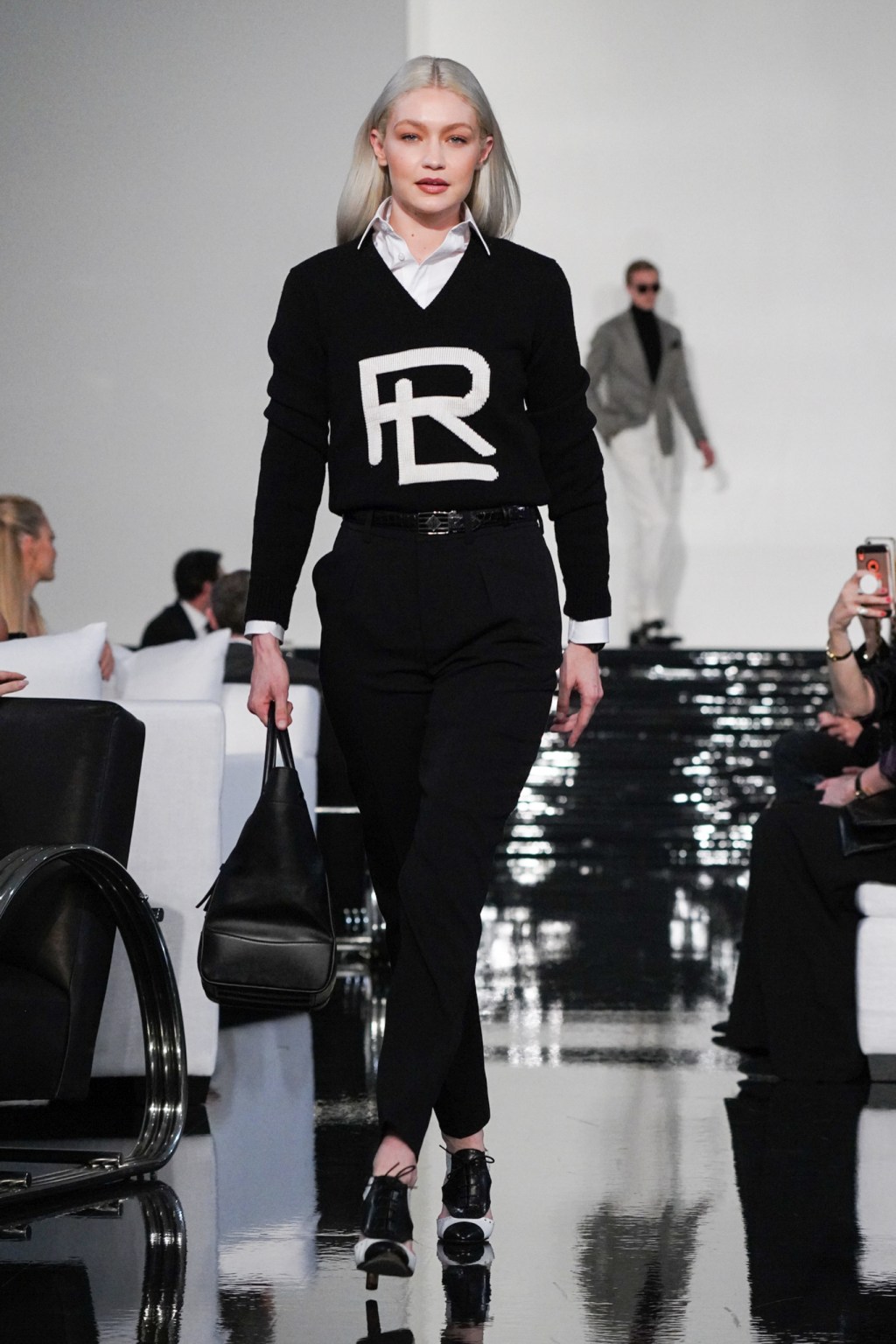 Ralph Lauren transformed a gallery at the Museum of Modern Art into a sleek replica of his Fifth Avenue apartment on Tuesday night, and welcomed guests for cocktails and a show that felt like a turning point for the brand in terms of runway cool, with Gigi and Bella Hadid, Shalom Harlow, Tyson Beckford and a slew of other all-ages model personalities leading the charge.

It was Monáe who was the showstopper at Lauren’s last runway show, held at a rendition of Ralph’s Club in the Financial District in September 2019. While there was no dancing on tables Tuesday night, there was a wonderfully welcoming vibe, from the window recreations of Lauren’s apartment views over Central Park, to the design books on cars and big bowl of M&Ms for snacking on his center table.

For all the obsession with the metaverse and NFTs, and Lauren’s own recent foray into Roblox, seeing models casually weaving around sofas and tables, making eye contact, smiling, winking and engaging guests IRL, was a treat.

“I think the world is wanting some warmth,” Lauren said during a preview. “And for the cleanliness and sleekness of the clothes, the black-and-white sensibility, MoMA was the perfect place,” he added, joking that his actual apartment is “a lot smaller.”

The collection was also about coming home. Rather than hanging it on a theme, Lauren used the off-calendar event to reassert his role in charting the American fashion landscape, working in a palette of black-and-white with flashes of red, and focusing on the streamlined styles and sartorial splendor that have made him an icon for 50-plus years, only modernized for today.

He reminded people of his contributions to genderless tailoring long before the concept inspired a Victoria & Albert Museum exhibition, from actress Lily Collins dressed up for the show in a smart black tuxedo with cigarette pants, heels and bowtie, to the exacting nipped at the waist, slightly cropped men’s tweed jacket over full white trousers look on the runway, reminiscent of Lauren’s beloved 1940s film stars. (There was an “Annie Hall” reminiscent white necktie over black gown look, too, a reference that’s been bubbling up on the streets again.)

Luxe knitwear may be a hot fashion category now, but it’s been part of Lauren’s story for years, as seen on the chunky black-white-and-red Fair Isle ski sweater over frothy black tulle, slit front ball skirt (how we’ve missed that cozy dressed-up classic). He updated it for 2022 with black bike shorts underneath. Fair Isle appeared as a design motif throughout, including in black-and-white embroidery on a gown and a power parka for the Aspen jet set.

Sportswear with a sense of place is another part of the Lauren Polo legacy, seen here in the handful of equestrian looks (red tail coats and jodphurs may seem silly, but see the Gucci “Aria” collection). The designer was also one of the original runway curators of the Western wardrobe, and the combination of black tuxedo, shearling sack coat with popped collar and tipped cowboy hat was a minimal, elegant twist on it.

There were several nods to New York City, from the Ralph Lauren x Yankees black varsity jacket and baseball hat over a tuxedo that brought street currency to the runway (part of a collaboration with Major League Baseball), to the stunning silver New York skyline-embroidered gown that must be destined for a red carpet.

This was a collection about polish the Ralph Lauren way. Oscars are coming up on Sunday and for Hollywood thoroughbreds, there was plenty of fine-tuned tailoring for men finished with velvet smoking slippers, and sleek eveningwear for women, including a strapless gown with red bodice and bow train.

Lauren has returned to the conventional seasonal fashion calendar; rather than a see now, buy now collection landing in stores right away, he’s back in line with the greater industry showing a season ahead: fall 2022.

“See now, buy now was actually good, but it was bad for production and bad for European press, so we decided to do it this way,” Lauren explained. And indeed, the foreign press was in attendance on Tuesday.

You have to admire Lauren’s willingness at age 82 to always regroup and evolve. That flexibility is paying off on the business side, too, where president and chief executive officer Patrice Louvet has helped lead the brand’s reset in the luxury market, which will soon include opening four new North American stores in Miami, Detroit, Chicago and Atlanta, with an eye toward a new phase of growth.

There should be lots of covetable clothes to fill them.

Lauren recently announced a new collaboration with Morehouse College and Spelman College, recognizing the long overdue fashion history of Black students with a licensed collection of 100 collegiate-style pieces inspired by images from the school archives dating back to the 1920s, and photographed on students, graduates and faculty. That collection goes on sale next week.

“It was very honest and very important,” he said of how the licensed collection came about after a conversation with longtime employee James Jeter, who questioned his future at the company. In the aftermath of George Floyd’s murder and the country’s continued racial reckoning, he wondered if the brand’s definition of style was too white, the designer explained, of how Jeter challenged him.

“It’s catching up with the world and seeing what you missed and what could be done,” Lauren said of the initiative. “If I’m here on earth, I ought to be doing something worthwhile.”