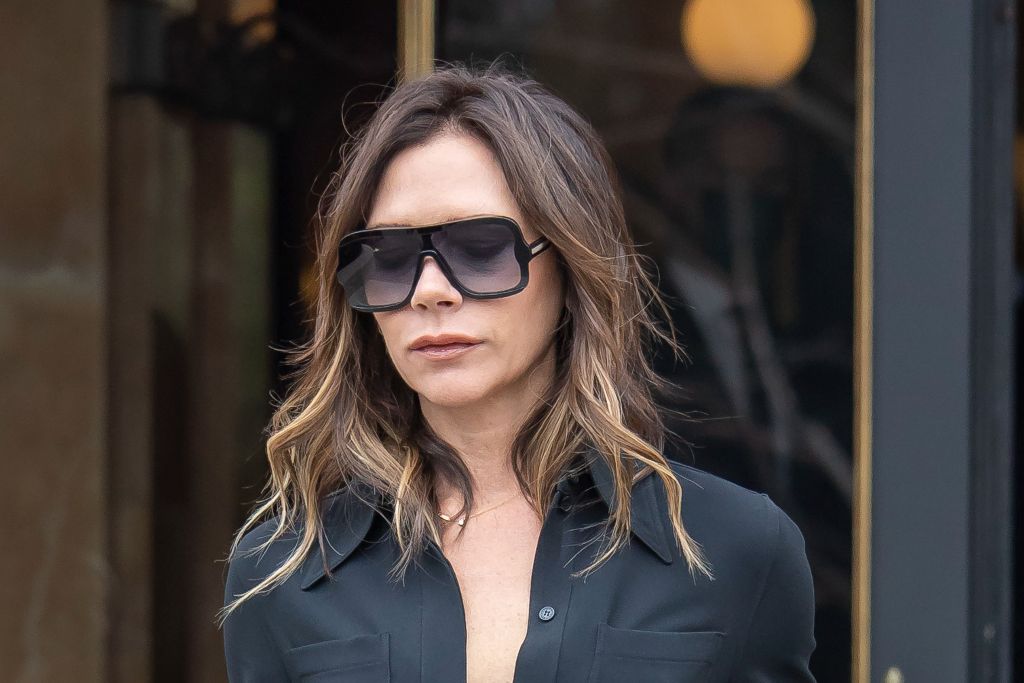 Victoria Beckham went a shockingly casual route while having a girls’ moment with close friend Eva Longoria at home.

In a new photo shared on Instagram, the former Spice Girl posed with her legs crossed with Longoria, clinking together cups of tea. For the teatime occasion, she wore a set of navy and white striped pajamas beneath a matching robe monogrammed with red “VB” lettering. Completing her indoor look were a pair of oversized angular sunglasses. Longoria, opted to go barefoot in a gray and white printed robe — which actually hailed from Beckham’s own wardrobe.

“Just two desperate housewives having a catch up!” Beckham captioned the photo of the pair. “I love you @evalongoria.”

When it came to footwear, Beckham contrasted her sleek footwear wardrobe for a set of close-toed slippers. Featuring a fuzzy white texture, the slip-on style included open backs and gained a whimsical punch from pink smiley face graphics on each toe. The style emphasized the coziness of Beckham’s outfit.

The pair was a causal departure for Beckham, who often can be seen on and off-duty wearing pointed-toe stiletto pumps — even with leggings, which she proved in a bathroom mirror selfie earlier this month.

Slippers like Beckham’s are a cozy option for home attire, due to their soft textures and flat soles. Pairs with bright colors and graphics have also emerged to bring added brightness to at-home looks, like new styles by EMU Australia, Minnetonka and Apparis. Aside from Beckham, stars including Kendall Jenner, Dakota Johnson and Sienna Miller have also been spotted in slippers by Ugg, Charvet and Gucci in recent weeks.

Beckham has made pointed-toe footwear her staple over the years, wearing numerous pairs of sharp boots, mules and pumps by her own namesake label. When it comes to heels, she’s often worn styles by Christian Louboutin, as well as Casadei and Nicholas Kirkwood. Ankle boots by Alaïa and sandals by Bottega Veneta are also some of her go-to styles. When off-duty, the Victoria Beckham Beauty founder also has a penchant for Adidas sneakers — plus shoes from her own athletic collaborations with Reebok.