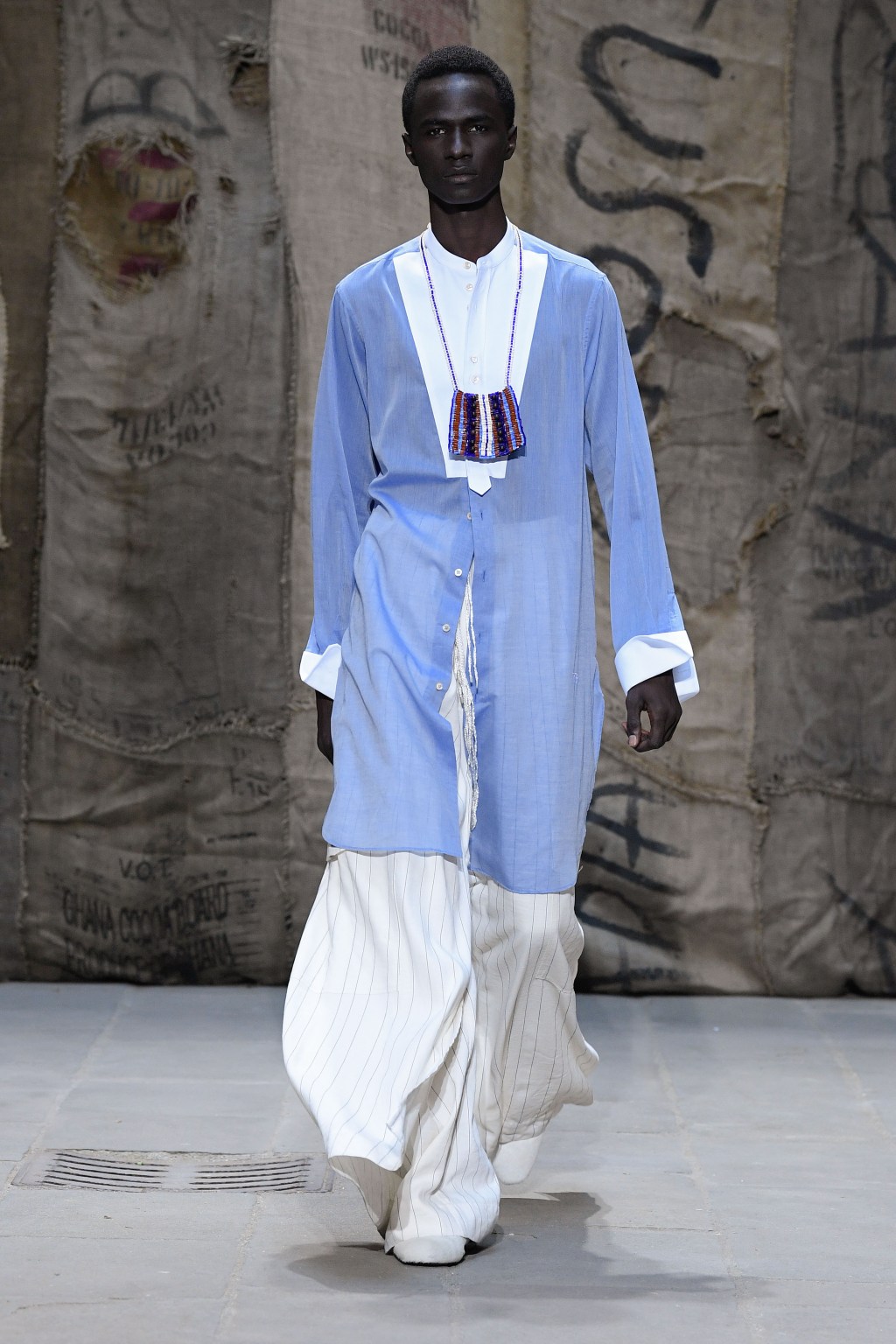 “Things happen” in Florence, said Grace Wales Bonner during a preview ahead of her show in Florence Tuesday night as part of Pitti Uomo.

Indeed, her spring collection was a journey larger than life.

It touched down in Burkina Faso, where hand dyed jerseys and cotton were made, and Ghana, where she had her soft-edged jewelry crafted from glass beads, rock crystals and baroque pearls adorning most of the looks, then on to Paris, where opera coats were tailored by the House of Charvet, and London where Savile Row stalwart Anderson & Sheppard contributed to some of the tailored pieces.

Her mix of utilitarian details and modern tailoring — as in the wide cargo pants worn under elongated evening shirts with a contrasting bib, or fitted suits with round ribbed lapels and cropped jackets dotted in studs — had echoes of period style, be it Renaissance Florence or Elvis Presley.

The designer consistently injected crafty details, making it her primary goal to display them as the pinnacle of luxury today.

“To me the craft element is really an important part, it’s a mission of the brand,” she said.

It was a strong representation of her understanding of men’s silhouettes and proportion. For all its refined aesthetics, the collection was never intimidating, rather sophisticated and spoke to today’s youth. She paired the looks with leather sandals, cowboy boots and the latest iteration of her Adidas collaboration, hand-stitched patent sneakers bearing macrame details.

The artisanal feel and message of togetherness carried through even more powerfully when spelling “ascend” on a varsity jacket, the ultimate fashion representation of youth, again proving her prowess in mingling with pop culture.

Her women’s looks, quite a few as she pushes into the category, were equally captivating, built around wrap skirts paired with shirts and fleece polos tucked in or macramé frocks.

She picked the imposing Palazzo Medici Riccardi for the Pitti display, once home to patron of the arts Alessandro de’ Medici, known as the Black Prince of Florence, but reconfigured it via a site-specific installation by Ghanaian artist Ibrahim Mahama, who covered the floor in hand-stitched jute sacks once used to export cocoa from his native country, here turned into a message of unity among peoples of the world.

“I was thinking about Black presence within Florence historically, whether that’s de’Medici or other interaction of West African people in the city, dignified and sophisticated characters,” the designer said.

The show was two years the making and her first IRL showcase since 2019.

“I also connected the history of Wales Bonner…it was like going into the archives and thinking about some of the early ideas and aspirations within the brand,” she said.

It was an act of maturity for the designer, imbued with poetry, dignity and great fashion. Luxury stalwarts should keep an eye on her. Are they already?