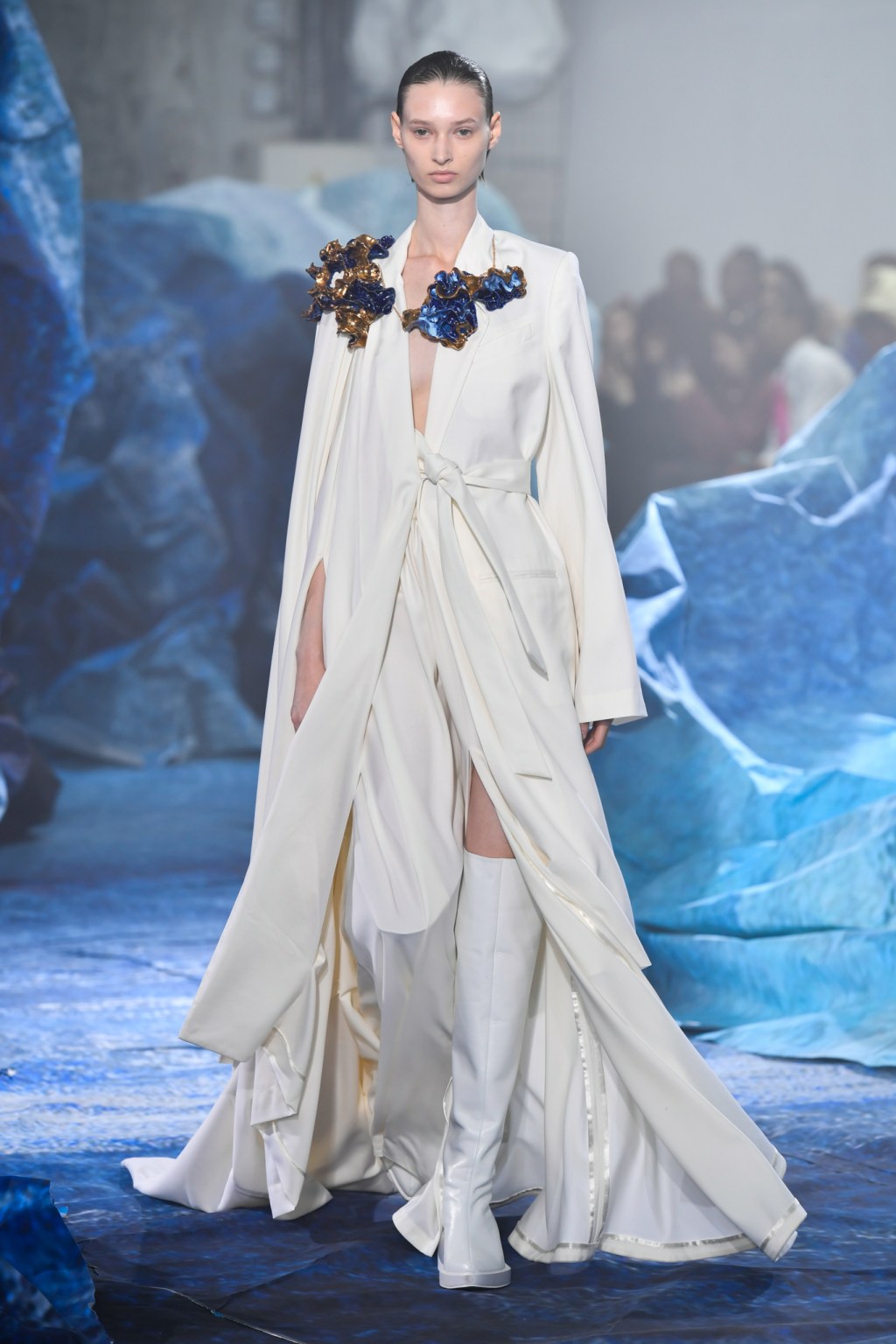 Weighed down by a world of doomscrolling, Yuima Nakazato sought solace in craft, sketching pictures, shaping clay (his own ceramic jewelry featured on the runway) and manipulating fabric. When he looked through the window of his Tokyo workshop, patches of blue sky between the buildings fired up his imagination.

That color — the dominant shade of the earth as seen from above — provided the prevalent hue in this otherworldly collection, his shamanic beings evocative of the Na’vi from James Cameron’s “Avatar.”

Their quivering, undulating second skins, however, by way of the forms of his voluminous creations, seemed more akin to the flora of that creature’s native planet, Pandora, with tentacular padded capes and featherlike ripples of organza shaped into voluminous capes and trains.

His supernatural theme was enhanced by a trance-like soundtrack by Ryuichi Sakamoto and Senjan Jansen, punctuated by the cries of coastal birds.

Nakazato transformed deadstock fabrics, tearing them up, weaving and dyeing them once more to create what appeared like living sculptures on the runway. “Because of the trend for digitalization, I really wanted to have something like patching physical things using traditional Japanese craft techniques,” the designer explained backstage before the show.

The set played into the label’s sustainable messaging, designed to be recycled right after the show. Crafted entirely from paper, it was a blown-up sketch by the designer that was teased into crumpled iceberg-like sculptures and covered both the walls and floor of the Palais de Tokyo venue.

The rectangular shapes of traditional kimono fabrication he bases his designs on to avoid waste were visible in simpler pieces like off-white shamanic robes fastened together with his proprietary Type-1 attachments. Elsewhere, the parallelogram was artfully transformed and disguised with a skilled hand and vivid imagination.

Nakazato’s innovative bio-smocking technique, which allows him to digitally control the shrinkage rate of a fiber to produce lasting creases and pleats, was combined with ancestral indigo dyeing, Shibori tie-dyeing and lacquering techniques on a sustainable protein-based biomaterial from Japanese producer Spiber.