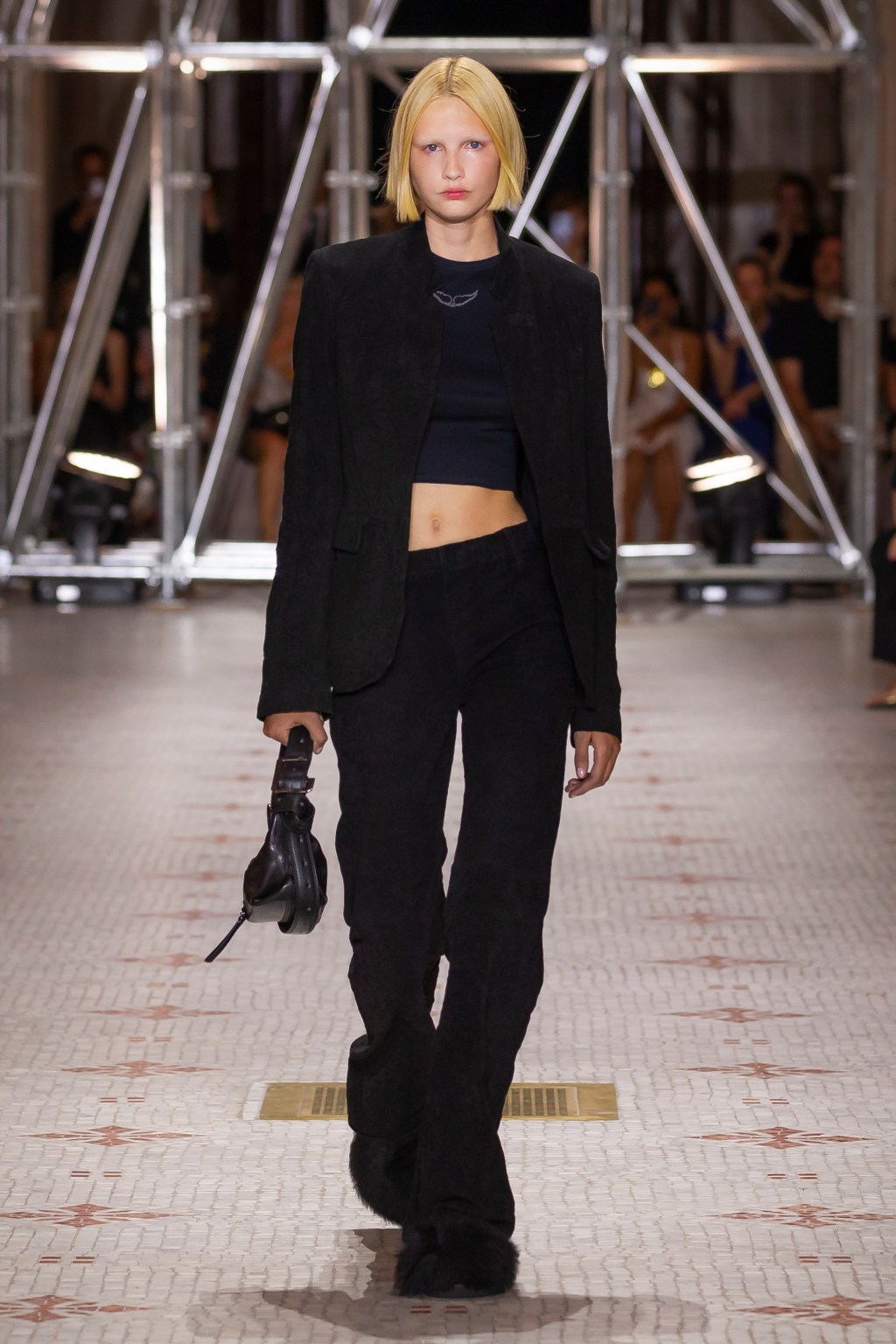 Zadig & Voltaire returned to Paris for its latest collection. Presented off calendar, the show was held in the gilded hall of the Musée des Arts Décoratifs with the runway surrounded by scaffolding, symbolizing a brand that is under construction and building up for growth.

The return to its hometown after five years of showing in New York represents a reinvention for the French fashion house and a doubling down on its roots. Inspired by the social movements of 1968, designer Cecilia Bonstrom had touches of folksy ’60s vibes in shearling vests and intricately embroidered black velvet Nehru jackets, while still geared to the TikTok generation of today with plenty of toned midriffs on display.

Shiny silver trousers were juxtaposed with loose-fitting dresses in bursts of bright color. The vibe varied from indulgent in sequin and lace lingerie-style skirts, to industrial with double denim and workwear-inspired smocked tops. Crinkled suede was a new addition in Zadig style, which has used the handcrafted technique on other textiles.

Chunky knits added a cozy touch that stayed true to the brand’s rock-chic roots. It’s a fall collection after all, the women’s ready-to-wear on display just ahead of Paris Men’s Week in a move designed to create social media buzz before it hits stores on July 1.

The front row was filled with TikTok stars including Lily Chee, Ian Jeffrey and Mulan Bae, while models walked to a live performance from artist Regina Demina, who created a special soundtrack for the show that was simultaneously dropped on Spotify. The return to Paris and the off-calendar show are part of a long-term strategy, as outlined by Bonstrom.

“We’ve really grown into an international company,” she said. “But Paris is the capital of fashion, and we’re a French fashion house with French DNA. That’s why it’s very important for us to come back this season and we really want to be anchored here.”

Bonstrom calls the brand’s ethos “effortless luxury.” Zadig straddles a position on the high end of the high street, with a focus on European and Japanese fabrics and construction, and a price point of around 350 euros to 400 euros. While there is pressure on the supply side, the designer said the brand does not intend to raise prices.

Zadig has invested heavily in its sustainability programs and supply chain tracing, Bonstrom said, “so I can really be reassured that we don’t bring out some fake promises.” TikTok comes into play again, as she understands young consumers want numbers and will hold brands accountable on social media.

After years of expansion in the U.S. and South Korea, the big push is now in China. The company reopened its first revamped and rebranded shop in Hong Kong on June 16, after it bought back its stake from former partner IT Group in 2020. There are plans in the works for a project in Shenzen and a pre-collection show in the country.

“We have put a lot of pressure on our shoulders, even if Zadig has already come to a beautiful point and has proven that the style is very desirable in the world, but we have bigger ambitions,” Bonstrom said.